Song of the Day

HISTORY OF MUSIC IN THE RECORDING INDUSTRY AGE – pt 3

HISTORY OF MUSIC IN THE RECORDING INDUSTRY AGE – pt 3

Coon Song was a major genre and trend in popular music in the United States from about 1880 to 1920. Arguably it was the first commercial genre in the history of music in the recording industry age. Therefore the first pop, along with marches and danceable classical music.

It mixed various styles of American popular music with vocals and lyrics that were meant to be ironic.

Typically Coon Song presents a racist and highly stereotyped image of African Americans. It all relied on the segregationist and white supremacist regurgitation that followed the Reconstruction after the American Civil War. Slavery had recently been abolished. Even just a theoretical equality between whites and blacks was hard to perceive. Especially in the South of the US.

There was then a widespread white fear that African Americans would migrate from rural to urban areas, particularly in the North. Which is exactly what happened.

People of primitive nature, wearing fancified clothes, jewelry and habits. This was the picture. A marked racist nuance was therefore added to the usual periphery/center cleavage.

There was a moment when George Johnson, a slave-born African American, had to record the same song more than fifty times a day. He first demonstrated how successful an African American on records could be. He opened the door for the many who would follow him.

His first recorded hit was “The Whistling Coon” in 1889. It went number one for five weeks in July and August 1891. Just after his even more successful “The Laughing Song” kept number one for ten weeks in April, May, and June 1891. So he basically was number one in the US from April to August 1891.

Those two tunes have been essentially the first commercial hits in the history of music in the recording industry.

Despite the various versions of white artists, it was Johnson what the operators of the phonograph parlors and the public wanted. 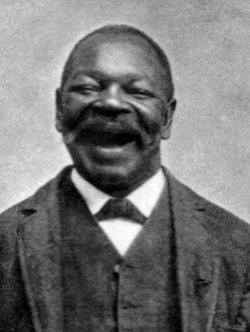 • From slavery to a recording studio

George W. Johnson was thus the first African American singer to achieve fame through recordings. He was born a slave in Loudoun County, Virginia, in October 1846. His father was fifteen and his mother only twelve or thirteen. They were freed in 1853, before the Civil War and before the abolition of slavery that followed.

His parents were illiterate but he grew up in a wealthy farmers house, with the Moore family, as a servant and personal companion of their young son Samuel. They taught him to read and write, not only unusual at the time but downright illegal for an African American in the pre-war south. When Samuel then learned to play the flute, George learned to whistle along and developed a vast repertoire of melodies.

Then came the war, with its devastating social and economic effect on the South in general and the area where Johnson lived, one of the main battlefields, in particular. During the chaotic days following the abolition of slavery then, he moved like so many others to the north, to New York. He lived as a street performer who whistled and sang songs at the ferry terminal for pennies. In 1890 Victor H. Emerson of the North American Phonograph Company took him to a recording studio. The song that Emerson wanted Johnson to record was that “The Whistling Coon” already known in the minstrel shows. Then came “The Laughing Song”.

Both Coon Songs, the lyrics of The Whistling Coon and The Laughing Man are racist and humiliating to say the least, no doubt. A former slave, educated and literate, who earns his living by singing overtly racist songs, this was the scenario. What and how Geroge Johnson must have felt while repeatedly singing these lyrics is hardly understandable by today’s minds. Certainly there is a risk of anachronisms by trying to attribute today’s values to the perceptions of the past. All this, however, is of enormous help in being able to fully reflect on the customs and values of the American society of the 1890s, when these recordings went so immensely popular.

He recorded them literally thousands of times. Each recording was unique, and the relative compensation allowed him a more than decent life at the time: he earned $ 200 in a week, an average American white worker earned $ 500 a year.

But there were no copyright laws, yet. No royalties. Once the discs replaced the cylinders, companies only needed one or two good recordings for a master that could be duplicated indefinitely. His star stopped shining, his income ceased.

George Washington Johnson had demonstrated how successful an African American on records could be. He died poor and forgotten although, on January 23, 1914, at the age of 67, in a public house in Harlem. A sad ending for the first African American star in the history of the record industry. He was buried without particular glory in the Maple Grove cemetery in Kew Gardens, Queens, New York, where, however, finally in 2014, a hundred years after his death, a memorial was dedicated to him.

Hi Admin. How Are You. Very Nicest Content Thanks. https://pornxss.net/actors

HISTORY OF MUSIC IN THE RECORDING INDUSTRY AGE – pt 2

The acoustic version of the Smashing Pumpkins has become one of the band's favorite songs, complete with public endorsement from Fleetwood Mac's Stevie Nicks herself.